The “Neon” feature was signed with the pen name “Tagor Maroy,” which leaves some question as to the hero’s creator. Since Hit Comics was one that Will Eisner co-owned with Busy Arnold, it’s reasonable to assume that Eisner might have created the character concept and written the first stories, as he did with characters like the Ray, Doll Man and Uncle Sam. Alex Blum is the most likely artist on the feature. Blum is known to have worked on the “Strange Twins” feature and his style is recognizable after a brief study. Forms and faces seen frequently in “Strange Twins” and elsewhere also appear in “Neon.”

Quality published another hero named simply “"the Unknown.” He debuted after Neon’s feature ended, in National Comics #23 (June 1942). Neon snagged several covers of Hit Comics, issues #2, 4, 8 and 9, but his feature was very short-lived.

Tom Corbet was serving in the French Foreign Legion when the war in Europe had begun. In northern Africa, his platoon was ordered to put down a native tribe that was being supplied by the munitions manufacturer, Morgan Crooke. It was a suicide mission. On foot, all but Corbet perished in the heat. With his last effort, Tom stumbled upon a mystical oasis. When he drank from its phosphorescent waters, he was transformed… glowing! He found that he was able to emit neon-like rays (which were powerful enough to kill). He also could fly, and discovered an impending air attack. Taking the name Neon the Unknown, Corbet led his former comrades in the Legion to victory. (Hit Comics #1)

Neon’s next appearance was at the Freedom Fighters’ first battle just before the attack on Pearl Harbor. There he supposedly died (his body was not recovered). (All-Star Squadron #32) 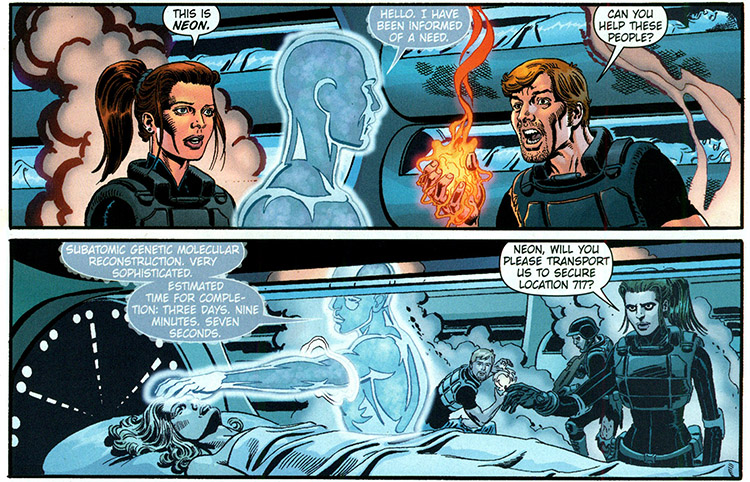 The original Neon could channel powerful light energy into “neonic beams.” This energy could be used to fly, to blind, as force, or as lasers. It was known to be powerful enough to kill a tiger, disintegrate solid matter, and disable a fleet of airplanes. Its application was near limitless. Neon could also turn his own body into pure intangible energy, sometimes assuming a swirling “neonic” shape. Once when someone was describing another person, an image of that person appeared in Neon’s head.