As patriotic heroines go, Miss America appeared just before Wonder Woman, but both were preceded by Quality’s own USA by several months. Joan Dale’s costume changed frequently and the flag-themed look didn’t actually show up until her fourth appearance. In Military Comics, Miss America was hot-tempered and her powers were near limitless. A revolving door of creators might have been its downfall. Elmer Wexler only drew her first two adventures (his only signed Quality Comics contributions).

At DC, Miss America’s history has been greatly embellished, but because the original feature was so short-lived, the changes do not necessarily affect the “continuity” of her Quality appearances. Writer Roy Thomas pulled in Miss America after DC’s Crisis on Infinite Earths, to fill a void in continuity left by the erasure of the Golden Age Wonder Woman. Thomas’ revised origin for Miss America was roughly the same as that from Military Comics #1…

In the late spring of 1941, while visiting Bedloe’s (Liberty) Island, young reporter for the Daily Star Joan Dale was overcome by sleep and dreamt of the spirit of Lady Liberty. When she awoke, she found she’d been granted “magical” powers. Pointing to a tree, she wished it were gone—and it disappeared! When she saved a man from some thugs, the man thanked her and called her “Miss America.” Joan liked the nickname and decided to create a persona around it. Back at the newspaper, her boss sent her to a bomb site, where she was able to divine clues from objects in the rubble. There she overheard murmurs of an attack, but when she told the Chief Inspector of the FBI, he didn’t believe her. So she set out to bust up the spies herself. She used her new powers to deflect the bomb and crush the getaway car. (Military #1)

And then she died. Before Miss America was looped into the DC role of Wonder Woman, she appeared in All-Star Squadron #32 as a charter member of the Freedom Fighters. This tale picked up her story late in her first year, on the eve of the Japanese attack on Pearl Harbor. Her fellow patriotic hero, Uncle Sam, got wind of the attack and assembled a group of heroes to prevent it. Their mission was a near-success but a sneak attack apparently killed them all, save for Uncle Sam.

Miss America probably would have stayed dead if not for the Crisis. Returning to her retooled origin story in Secret Origins #26, we learned that Joan had survived the Japanese attack and her comatose body was reclaimed by agents of Project M. She was discovered by Robotman and the Young All-Stars, who visited the facility.(Young All-Stars #12) There a battle with the Ultra-Humanite broke out, which awakened Joan from her coma. (#14) She promptly returned to the defense of her country and in late May 1942, even joined the Justice Society as the group’s secretary! (Annual #1) “Secretary” had also been the title awarded to Wonder Woman when she joined the JSA, in All-Star Comics #12 (Aug. 1942). The first reference to this switch was in Infinity, Inc. #49, April 1988.

Recently, Joan lost both of those closest to her. Lyta and her husband, Hector Hall, perished under mysterious circumstances. (JSA #80) Next, her husband Derek succumbed to old age. Upon his passing, Joan revealed a great secret: she had used her powers for decades only to effect the appearance of aging—for Derek’s sake. Her “loss of powers” had also been a ruse. (Uncle Sam and the Freedom Fighters #6) 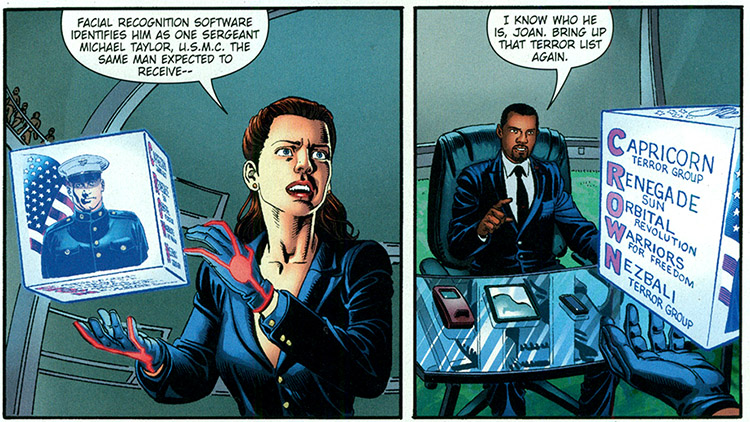 Timely (Marvel) also had a “Miss America” that was considerably more successful, but who debuted after Joan, in Marvel Mystery #49 (Nov. 1943).

The Miss America pageant was begun in 1921.

Miss America possesses formidable telekinetic abilities. She is an expert in their use; not only can she use them to affect objects, but can transform matter on a molecular level.

There may be a mystic element to Joan’s powers, which could be the explanation for her extended longevity.