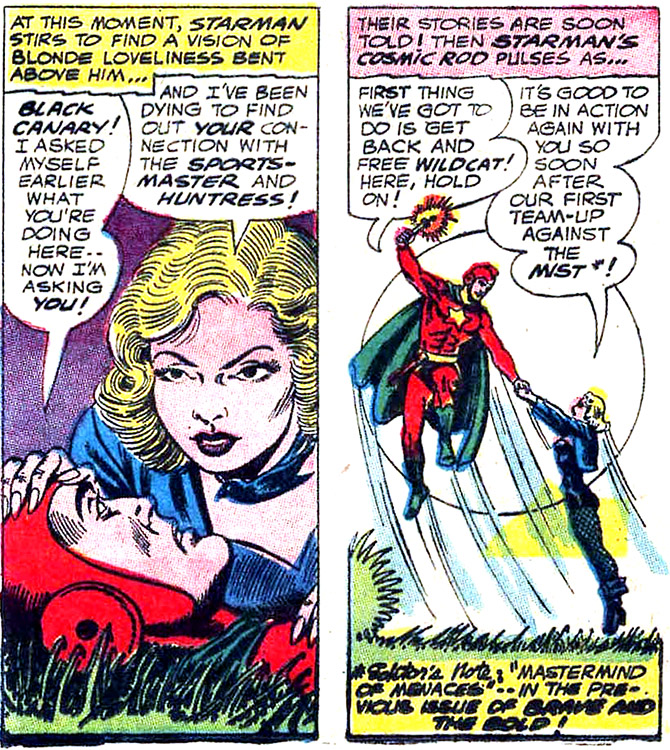 Dinah Drake Lance was raised by her father, Gotham City police detective Richard Drake, who died of a heart attack in the mid-forties. After she became the Black Canary, she worked closely with Johnny Thunder, who harbored romantic feelings for her. But Dinah's greatest affection was reserved for detective Larry Lance, whom she married in the early sixties. They had one child, a daughter, Dinah Laurel Lance. Shortly after her daughter's birth Dinah had an affair with fellow JSA member Ted Knight (Starman I), although they soon ended the relationship by mutual agreement. Whether because of this or other reasons, Dinal and Larry divorced.

Mother and daughter had a normal, albeit stormy, relationship. Her daughter had a relatively normal childhood until she manifested a metahuman "Canary Cry" during adolescence. Since she had developed a close relationship with several of her JSA "uncles," she began training with them — including Ted Grant (Wildcat), who trained her in the martial arts. (Black Canary/Oracle #1) When Dinah was 18, she was briefly married to a college classmate, Craig Windrow, although the marriage ended after only nine months.

The Dinahs worked together during the day at the Pretty Bird Florist until Dinah, Jr. could stand it no longer. When Earth was invaded by creatures from the planet Apellax, she donned her mother's costume and made her public debut as Black Canary II. (JLA: Year One #1) With the others who had defeated the aliens, she founded (and helped name) the Justice League of America. The JLA became Dinah's life, and soon she began a long-term relationship with fellow Leaguer Oliver Queen (Green Arrow).

She remained with the JLA for many years, until its dissolution. And she rejoined for a brief time when the new "Justice League International" formed. Then she joined Ollie in moving to Seattle where they opened a new shop, the Sherwood Florist. During her time with Oliver, she was kidnaped and brutalized by a gang of drug smugglers. The attack destroyed her Canary Cry and she may now be unable to have children. (Green Arrow: The Longbow Hunters #2)

During the JLA and JSA's battle with the monster Aquarius, Larry Lance was killed. After this, the elder Canary retired (JLofA #74) and the women became estranged for a time. They made amends several years ago upon the elder's death bed; Dinah, Sr. died of cancer caused by Aquarius. (Secret Origins #50)

Dinah ultimately left Oliver not long before his death. (Green Arrow #0, 91, 101) Since his return to life, they dating briefly, until she realized she couldn't trust him anymore. She has also had brief relationships with Ray Terrill (Ray II) and Pieter Cross (Dr. Mid-Nite II).

Dinah found a new purpose as a full-time operative for Oracle — one of the Birds of Prey. Over time, the two have became best friends as well. She also joined the newly-reformed Justice Society for a short stint. (JSA #2-31) She remains a reservist for both the JLA and JSA.

On one mission for Oracle, Dinah was immersed in one of Ra's al Ghul's Lazarus Pits. This "fountain of youth" took several years off Dinah's age and restored her sonic powers.

In recent years, Dinah's martial arts skills have increased greatly. After meeting the legendary assassin Lady Shiva, Dinah agreed to train with her. At periodic intervals, Dinah would accept challenges to learn new disciplines. After the JLA's recent decline, Dinah helped Green Arrow put together a makeshift team to combat The Key. (JLA #120-123) Oliver noticed her prowess and cautioned her about this newfound strength. Subconsciously, he worried about the same thing as Dinah herself: would these skills come with the cost of her own principles?

After the catastrophe created by Alexander Luthor, Dinah took up an ambitious mission: to reform the nefarious Lady Shiva. To this end, she challenged Shiva to trade places. Dinah would train in the Asian village where Shiva was reared, and Shiva would join the Birds of Prey as the Jade Canary. Dinah soon met Shiva's "Mother" in a run-down commune, where Dinah was quickly knocked down a few pegs and nicknamed "Tag" (young swine). In her first day there, she was blidnfolded and beaten, then forced to defend herself. (Birds of Prey #92)

Still Dinah refused to succumb to the violent urges that life provoked. She soon proved herself by completing various trials — ones that Shiva herself had endured — and besting her opponents. Her "Mother" then set a near impossible task for her by calling in local warlords to invade the commune. Surprisingly, Dinah succeeded in driving them off, but she realized that this life was driving her towards becoming a killer herself. She refused to take Shiva's path and quit the commune. But Mother had one more card to play; she claimed that if Dinah left, her young friend, Sin would be trained to take up Shiva's mantle. (#94)

Since Dinah's arrival, this young girl had befriended her, calling her "sister." Dinah decided to save Sin from a killer's destiny and took the girl from the Mother. Simultaneously, in America, Shiva also relinquished her role with the Birds and released Dinah from all obligations (ironically, Shiva also took a new apprentice, Bethany). Oliver Queen, who was now the Mayor of Star City, helped Dinah circumvent some of the legalities of Sin's immigration. (#95)

Dinah settled back in, but after one more mission for Oracle, she made a momentous decision. She now loved Sin as a daughter and believed that her life with the Birds of Prey was too dangerous for the girl. (#98) Dinah resigned from the Birds of Prey. Before she departed, she showed Barbara a copy of her new memoir, My Mother's Daughter. (#99)

Soon after this, Dinah became a founding member of the next Justice League. This appears at odds with her decision to protect Sin, and her motives have yet to be revealed. (JLofA v.2 #1)

In pre-Crisis continuity, the younger Dinah was cursed by the Wizard while still an infant to create the Canary Cry. Johnny Thunder's Thunderbolt removed the baby to his own dimension, where she could do no harm, and then stripped Dinah and Larry of their memories of her existence as an act of mercy. Larry was subsequently killed and Dinah mortally wounded during the JLA/JSA battle with Aquarius. At the elder Dinah's dying request, the Thunderbolt retrieved her daughter, now a young adult, from the Thunderbolt dimension and had her take the elder's place. The younger Canary moved to Earth-One and joined the JLA. For a number of years, she believed that she was her mother.

In post-Crisis continuity (Secret Origins #32), Black Canary II was retroactively placed as a founding member of the JLA — effectively taking Wonder Woman's place in much of pre-Crisis JLA continuity.

Black Canary/Oracle #1 states that Oliver Queen was 12 years her senior.

JLA: Year One #4 suggests that Dinah, Sr. and Larry had divorced or separated, yet at the time of his death, it appeared that they were together.

Black Canary possesses a metahuman "canary cry," an extremely potent sonic force emitted from her vocal chords. This cry can not only deafen, but flatten everything in her immediate vicinity. Dinah does not like to use the Cry except as a last resort.